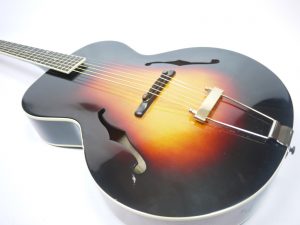 Part of the same family of brands as Recording King, and named for famous archtop designer Lloyd Loar, The Loar guitars are built in the far east, heavily influenced by depression era designs. I’ve tried a couple of Recording King guitars in the past, and been very impressed, so when I came across The Loar, my long held desire to haveave a a real, handcarved acoustic archtop was awakened. The difficulty was, finding one. They have a range of acoustic only instruments, the LH-300 has a solid handcarved top with laminate back and sides, the LH-600 is all solid, and the LH-700 is the top of the range, with all solid top grade tonewoods. I could find a couple of stores which had the 300 and 600, at widely varying prices, but nowhere that had the 700, and nowhere I could try either of the other two. There was also a dearth of in depth reviews, textual or video, to help me get a feel for the instrument. When I found a used model in good condition offered on eBay, it was a bit of a gamble; I won’t tell you the price, but it was plenty of moolah for an unknown quantity, even from a factory whose
goods I know and respect.

It’s with that in mind that I decided to make this the first review on StringTheory, and I hope those considering one of these fine instruments will find it helpful. 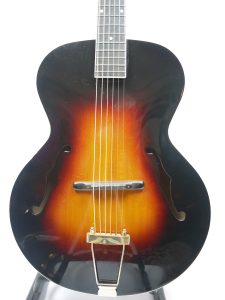 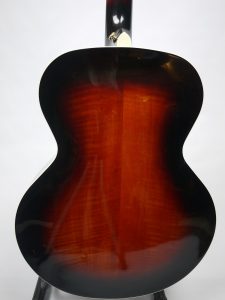 To my eye, this is a stunning guitar; it’s not loaded with bling, and it hasn’t cured me of wanting a D’Angelico, but it really captures the depression era Gibson L5 vibe nicely. The L5 changed gradually over the years, both in terms of size, later gaining pickups, and with a variety of inlays, but this looks very close to the late 20’s model, as played by Mother Maybelle Carter. The top is solid spruce, apparently hand carved in the far east, which made me wonder how many top carving machines there are in the world? I know that the current Epiphone archtops have pressed tops, and that the Gibson Custom Shop still has the old carving machines from the Kalamazoo facility that’s now owned by Heritage Guitars. Whatever the case, the top here is finely grained, with some subtle cross-silking, but not too much is visible, due to the very dark and pervasive sunburst, leaving only the area around the bridge visible. Gretsch call this kind of finish “Appalachian Cloudburst”, which I love, and it really adds to the feel of the instrument. The holes aren’t bound, and the ding near the upper bout F hole was courtesy of the previous owner, rather than coming as standard with the instrument. Top and back have simple ivory coloured binding, which contrast nicely with the way the sunburst continues onto the sides. Back and sides are solid maple, with beautifully bookmatched flaming on the back, which has been left much more visible than the top. The whole body is finished in high gloss nitrocellulose, and whilst you can argue whether that finish has the magical sonic properties that some claim, it’s certainly period appropriate. 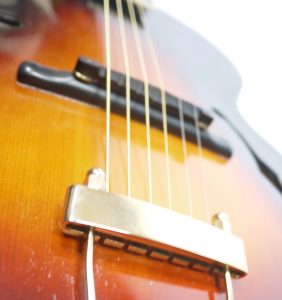 Whilst not ornate, the thumbwheel adjustable bridge is all ebony, including the compensated saddle. The neck is of hard rock maple, with a centre stripe, and cut in a vintage appropriate hard V profile which some thumb-behind players struggle with, but I particularly love. The 19 fret fingerboard is ebony, bound once again in ivory, with simple mother of pearl dot inlays reinforcing the depression era feel, and topping out with a bone nut. The headstock is faced in ebony, bound, and carries a The Loar logo and a fancy “flowerpot” inlay very much like that on Mother Maybelle’s own L5. Tuners are Grover Sta-tite open gear nickel tuners with “butterbean” buttons. These look vintage, but are an 18:1 ratio, making it easy to get your tuning right where you want it.

The quality seems excellent; the woods live up to the claim of AAA quality, and the appointments, while simple, are well executed; there are no clumsy cuts or bodged sections to give away the instrument’s relatively humble price (for a hand carved archtop). The only criticism I could make is that the finish around the join between neck and body is a little brushmarked, but you have to be looking closely, and when you bear in mind that you can get this guitar new for under £900, it’s hard to be too upset.

Picking it up, this guitar is big but not huge; the 16 inch lower bout isn’t up there with the biggest archtops of the golden age, or indeed with super jumbo flat tops, and the body is relatively slim compared to most dreadnoughts, more like a typical OM thickness maybe. The V profile of the neck is much more pronounced than on most electric guitars which lay claim to use it, which you will either love or hate; thumb around players with big hands like myself are likely to find it very accommodating indeed. Overall, it’s an easy guitar to get to grips with, comfortable and friendly.

Full disclosure here; many of you may see this guitar and think “jazz box”, but that’s not at all what I bought it for, I’m no jazz player, and this guitar does duty playing lead in a country folk band. In reality, in the 20’s archtops had found little traction in the jazz world, where banjos still led the way fretted instrument wise, and as mentioned previously, Maybelle Carter was a more visible user than any jazz great at that time. I came to this by way of David Rawlings, having picked up an Epiphone Century Masterbilt Olympic reissue, which I loved, to play his style. I was expecting this guitar to have a considerably deeper voice, and that I would use it alongside the Epiphone in much the same way Rawlings uses his 50’s D’Angelico, but in fact, it has supplanted the Olympic as my main lead guitar.

Giving this a strum, it sounds bright, punchy, resonant and somehow, hollow. The note separation stands out; even strummed, there’s little blurring of the notes in each chord (not to say that that’s a bad thing; it’s absolutely what you want in many situations, but perhaps not from an archtop). Spruce and maple is a bright combination of woods no matter what the guitar, and then the combination of the arch of the top, the pressure of the bridge (which is pushing down on the top, rather than pulling up as in a flat top guitar) and the parallel ladder bracing mean that archtops have powerful mid projection. Here, the brightness of the treble is pretty direct, with relatively few harmonic overtones, and noticeably shorter sustain than you might expect from an all solid flat top. As you work through the midtones, the punch and projection are noticeable, particularly if you dig in a little with the pick, and the bass is powerful but not deep. Compared to my little Epiphone Olympic, the bass is definitely more pronounced, but again, it has that hollowness to it, not at all like the boom of a dreadnought. Picked lightly, the Loar is lyrical and pretty; push harder, and it edges towards brash and aggressive. Strummed hard, it’s almost offensively loud, particularly with the action jacked up a little at the bridge (I tried this, and the difference in volume is higher than you might imagine); you can tell that it was designed to make itself heard in a world of horns and pianos but no amplification. Played alongside a flat top in my band, it cuts through beautifully, and when played hard for bluegrass flavoured stuff, it retains its robustness even on the high strings, where many guitars start to sound thin. Comping jazz chords, at least as well as I can, provides the expected chunk and projection too. 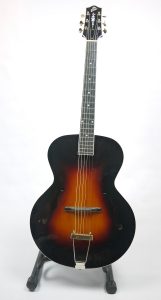 This isn’t a guitar for all seasons, but it’s probably for more seasons than you’ve been thinking. If you want to be heard, even now in the age of amplification, this will give you a tonal signature which will cut through the flat tops playing rhythm, and get your lead playing front and centre. Fingerstylists may find the short decay and lack of overtones less to their taste, but when you want to punch and punch hard, accept no substitutes. The fact that The Loar can make a hand carved archtop of this quality for less than £900 is incredibly impressive; there’s nothing I’ve found in the same price range that gets close.

The tone is perfect for what it is, but not an all-rounder.

Certainly the best value for money archtop on the market.

Buy the Loar LH-700 at Thomann