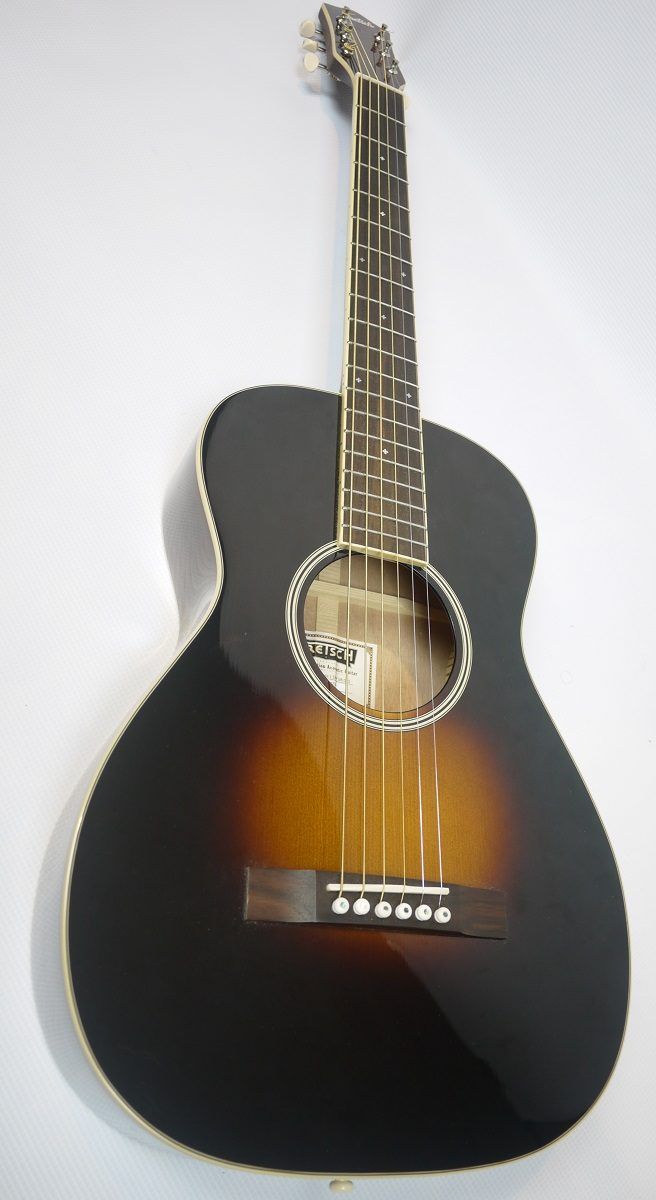 This little Gretsch looks nothing like the image that comes to most people’s heads when the name Gretsch comes to mind, but it’s an absolute category killer that other manufacturers would be wise to take note of. I reviewed this guitar for Acoustic early in the year (Link to that review on Musicradar at the bottom of the article), and I loved it so much that I bought one, and so did my partner in Honey and the Bee, Clare. In fact, I bought the exact one I reviewed, because I wanted to be damn sure that if this was an anomaly, I would be getting the absolute cracker I had played. Clare’s turned out to be every bit as good, and on that basis, I’ve been recommending it to everyone since, including a friend who had bought a Gretsch Jim Dandy, and was distinctly unimpressed. He ended up buying the sister model, the 9521 Triple O model, and was blown away by that also. I reviewed two other Gretsch acoustics, both from the Rancher series, and was impressed with those too, so that I now see Gretsch as a very underrated manufacturer of acoustic guitars. 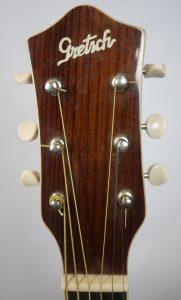 So, straight out of the gate, this guitar looks like a blues box, which gave me some initial preconceptions about the tone. When you see Robert Johnson, he’s holding a guitar which looks like this, and that barking, short sustaining, ladder braced blues box tone is what I am half expecting. Inspired by old Gibsons though it is, the 9511 is quite original in shape; the neck to body join is at the 12th, and so though the bridge is very near the bottom of the instrument, the body isn’t too tiny. The finish, described as Appalachian Cloudburst, is very very dark, with only a little patch of honey coloured spruce between the soundhole and the bridge. I love it, it’s one of the most unusual and handsome sunbursts I’ve seen, and it really makes the guitar stand out. The spruce of the top, as seen in that patch, looks pretty decent; it’s rare to see a poor quality spruce soundboard these days. Top and back are laminate, with a mahogany veneer, which looks nice; in fact, mahogany veneer, not needing to be structurally strong, is often more attractively figured than the solid mahogany used in most more expensive guitar builds. Something I appreciate about Gretsch is their honesty about the materials they use; their site clearly says “laminated mahogany”, and when the rule you usually have to use is “if it doesn’t explicitly say solid, it will me laminate”, I give a lot of kudos for that.

This is a simply appointed guitar; it is after all designed with a depression era vibe, and also, it’s really low cost. A quick google while writing this article revealed that the street price of the G9511 is currently about £265, which doesn’t buy you a lot of abalone or herringbone, and if it does, probably means the underlying guitar isn’t much good. The G9511 is bound in plastic, but with an aged ivory colour that’s appropriate to the vibe. There’s a simple black and white soundhole rosette, a simple rectangular rosewood bridge, and not much else to tell about the body. As standard, these come with off white plastic bridge pins, but I have replaced mine with bone pins with an abalone inlay. I honestly did it because I wanted to give the little box a treat for being so much better than it should be, but as I installed them, keeping the same strings on and just slackening them, I was able to hear an improvement in the already excellent tone, so I would say they were well worth the money. Gretsch don’t specify the saddle material, but it seems to be plastic, while the nut, according to the spec sheet, is bone. 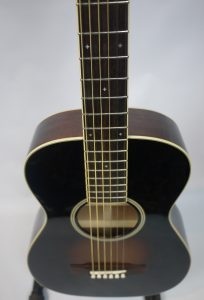 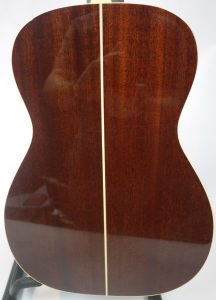 The 19 fret mahogany neck has a rosewood fingerboard, and is a slim modern C section. Eagle eyed readers will note that when I first reviewed the guitar, Gretsch’s spec stated it had a vintage V profile, but they have since changed this, and the influential guitar journalist in me would like to think that’s my doing. Many online retailers still retain the vintage V claim from the original spec sheet, but take my word, that’s not what you’re going to get, and most people will prefer it as it is. I personally love a hard V, but I’ve long accepted that those with hands like polar bear paws don’t get to make the rules for everyone. Fingerboard inlays are simple, but replacing dots with mother of pearl diamonds does give you a sense that at least some thought has gone into the decoration. The headstock is faced with mahogany, and has a simple Gretsch script; the headstock ornamentation from a White Falcon would indeed be out of place on this guitar! It has very simple vintage style open back tuners with aged ivory coloured plastic buttons; these seemed a little flimsy to me at first touch, but 9 months on, they work perfectly, and I think there’s nothing to worry about. The scale length, befitting such a dinky body, is 24.875″ (632 mm) , so the board has a lovely compact feel.

It’s nicely put together, simple but well executed, and after lots of play, a slight drying of the fingerboard at the last three frets (I don’t play a lot around the 18th on an acoustic parlour) is the only issue I’ve experienced, and a little lemon oil deals with that. Is it a looker? I would say so. I think it stands out from the crowd, which at this price point includes a lot of samey, me too guitars. It’s the cheapest acoustic guitar I own by some distance, but it sits in the herd holding its own visually. 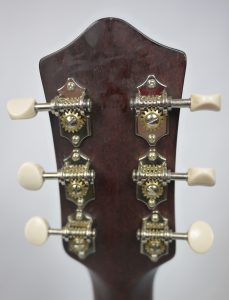 The G9511 is so accomodating you barely know it’s there. The little body and short scale mean it perches in your lap perfectly, an ideal companion for late night sofa sessions and off the cuff strumming. Mine lives next to my chair in the lounge, and is my go-to for any unplanned playing; I have no reason to take any other guitar down off the wall. The action on the review model was nice and low (neither mine nor Clare’s guitars have needed a setup), and the neck profile is accommodating, while the satin finish is easy to play on. It’s also incredibly light; tiny body, light construction, lack of electronics all add up to a really

You know what to expect from the tone here; a spruce and laminate parlour is going to be bright, twinkling, and intimate, but with a boxy bottom end, right? Well, yes and no. Bright it certainly is, sparkling in fact, a dancing beguiling tone at the treble end of things. Laminate bodied guitars can be a bit fundamental heavy, over direct, lacking in nuance, but none of that here; certainly the tone isn’t like my cedar topped jumbo, but any concern about a two dimensional tone can be put aside; it’s alive. The bright airiness continues through the midrange; there’s no fat, harmonic laden body to it, but it’s a winning sonic picture all the way down to the bass. This isn’t as boxy as you might expect; perhaps it’s the 12th fret join, but bass response is pretty decent, and the slightly quieter low E that I noted in my initial review has either improved, or I’ve got accustomed to the tone. This is not my go to guitar for big, bass heavy riffs, for sure, but the tone is balanced, and there’s certainly sufficient bass.

For fingerstyle, it’s sweet and delicate, I like to strum with my fingernail, and the brightness of the tone really compensates for the attack you lose by putting down the plectrum. It’s a surprisingly good lead guitar too; the tone is quite reminiscent of Kenneth Pattengale’s battered vintage Martin, as used in the Milk Carton Kids, so for a sweet, sustaining alternative to my arch tops, it’s wonderful in that role too. I have not found very many things this guitar can’t do.

This is the cheapest acoustic guitar I own, but it gets played the most. There’s a message in that. It sits by my chair, and is picked up several times a day. If I’m going camping, or to a festival, it gets thrown in the back of the car in its hard case. If I need to grab a guitar to play in the garden, it’ll be this. Since I bought it, nearly every song I’ve written has been on it. Clare’s sister guitar has featured on the radio in the hands of her husband, Dead Dead Dead gutiarist Matt Canning, because anyone who picks up this guitar loves it. In my original review, I said it wasn’t a stage guitar, but I’ve bought a set of condenser mics because I cannot bear to leave it behind. I would say that this is the best sounding spruce and laminate guitar I’ve ever played, and as an even higher compliment, it might be the best parlour I’ve ever played, and that’s up against some very high end instruments from makers like K Yairi and Santa Cruz. I would like to issue a challenge to any manufacturers, luthiers, distributors or retailers; send me a better laminate back and sides instrument, or a better parlour. I would love to play that instrument.

If you’re buying a parlour, play this. You have to. If you’re considering things like an OM, looking for a sweet voiced picker’s guitar; try one too. There aren’t many better bargains in the world right now.

Not much. Dreadnought players will miss the bass.

An incredible bargain, and a category killer.